Rabbit in the Moon by Deborah & Joel Shlian is now in Paperback!! 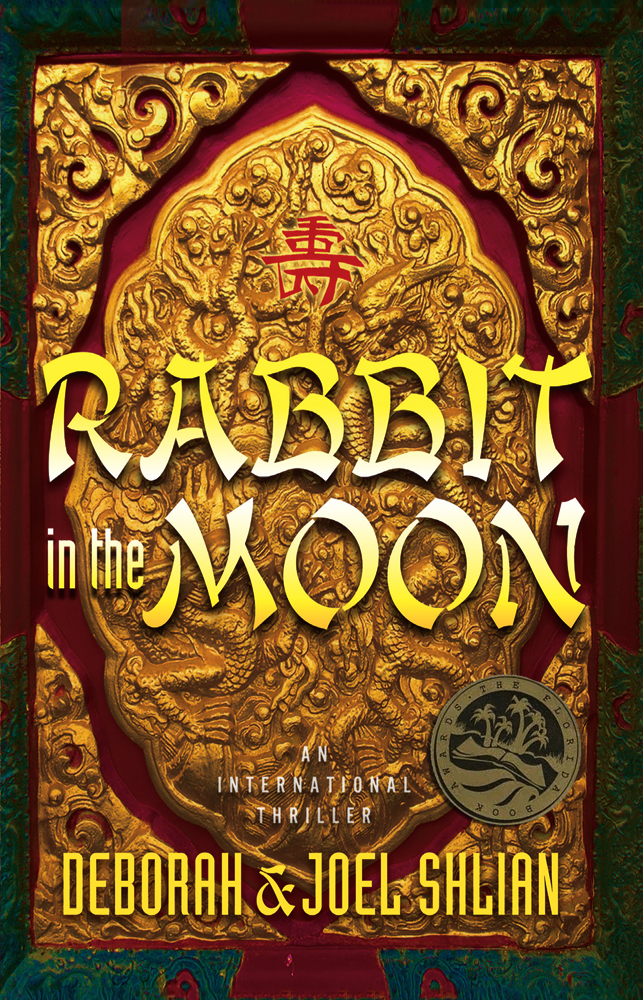 Good news! After almost a decade, Florida Book Award Good Medal Winner Rabbit in the Moon is finally released in paperback as an updated Second Edition.

Is mankind ready for a scientific breakthrough that could double the average lifespan? Dr. Cheng’s obsession to find the secret puts the doctor, his granddaughter, and the future of the entire world in jeopardy.

The backdrop for Rabbit in the Moonis the seven weeks in 1989 between the rise of the Student Democracy Movement and the fall with the Tiananmen massacre in June.  We chose this period for two reasons.

First, it was dramatic. Anyone who read the newspapers or watched CNN at the time can hardly forget the image of the young man holding up his arm to stop the tank from rolling over him.

The second reason for choosing this backdrop was because after our first trip to China in 1980, we returned to Los Angeles and became a host family for students from the mainland who were studying at UCLA. During the weeks leading up to Tiananmen in 1989, many of these students communicated with friends and family back in China using our fax machine. Remember, there were no iPhones or Internet at the time. Very few people in China had their own landlines then.

In talking with the students, they perceived the conflict as a generational struggle between the very old leaders, many of whom had marched with Mao and who were desperate to hang onto power, and the younger generation anxious for reforms.

We expanded on the generational theme by looking at how young versus old might view the acquisition of a longevity elixir, not only in China, but also in the United States and in Korea.

Writing a story with an historical backdrop requires accuracy. It was difficult, however, to know what was happening at the highest level of government at the time. The release of the Tiananmen Papersin 2001- secret documents smuggled out of China- reveal how the authorities reached their decision leading to the final confrontation. In 2008, another secret record dictated onto 30 one-hour audiotapes by the moderate Zhao Ziyang while under house arrest in 2000 (he died under house arrest in 2005), was published by Simon and Schuster. The title is Prisoner of the State: The Secret Journal of Zhao Ziyangand gives Zhao’s dramatic and disapproving account of the bitter power struggle behind the scenes as the students occupied Tiananmen Square, the deep rivalries between reformists and hardliners as well as the critical role Deng played in the decision to use force.

In the published memoir, Zhao describes the secret meeting of the Politburo Standing Committee on May 17 that led to the imposition of martial law. He contends that the crackdown was a miscalculation by the hardliners because the martial law declaration touched off even larger protests and an ultimate confrontation. “On the night of June 3… I heard gunfire,” he says in the memoir. “A tragedy to shock the world had not been averted.”

Both the Tiananmen Papers and Zeo Ziyang’s memoir formed the basis for assumptions we made in writing the novel. For example, there is a pivotal scene in the book in which three of the leaders meet with Deng Xiaoping, warning that the students threaten his leadership and convincing him to write an editorial for the People’s Daily (which he, in fact, did), accusing the students of creating “turmoil”. Deng’s editorial was really a signal that the hard-liners were in control because it alluded to the “ten years of turmoil” that was the Cultural Revolution. Unfortunately, the students did not appreciate the significance of the message. They did not know that behind the scenes the moderate Zhao Ziyang had been ousted. They began a hunger strike, announcing that they would not leave Tiananmen Square until the editorial was recanted.

As a result, any opportunity for defusing the situation disappeared. And as we know, on June 4th, tragically, hundreds, perhaps thousands were killed.

Now, 30 years after that bloody suppression, the facts about events that led to the Tiananmen Square tragedy have yet to acknowledged by the Chinese Communist government.

After the Tiananmen massacre, the Chinese leaders made a decision that they would tolerate more economic freedom in order to maintain power. In 1992 Deng visited the southern new territories and blessed economic reform with the famous statement “to get rich is glorious” This change was not meant to promote democracy, but rather to maintain central control. And as it happens, for almost two decades there was astounding growth and modernization, though not without creating serious problems including increasing poverty in the countryside, forcing young people from farms to the cities seeking work, elimination of free health care, increased pollution, increasing crime, widespread corruption, etc.

The irony is that the opening up of the economy, brought a rise in technology – people bought cell phones and computers – and suddenly websites and blogs appeared with ideas going out on the World Wide Web

As China has begun to face its own domestic financial crisis with rising unemployment, manufacturing decline, and some fear regional ethnic strife, the leadership has received increasing criticism from within the country.

In November, 2018 protests on Peking University brought a warning to student activists that protests “bear consequences”. The clampdown at Peking University comes ahead of several politically sensitive 2019 anniversaries, including the May 4 student protests in 1919 and the 1989 Tiananmen Square massacre, in which students from the university played prominent roles.

Sadly, President Xi Jinping has sanctioned a series of crackdown to all forms of dissent, including human rights, activists, labor groups and religious organizations

We hope that readers will find this new edition of Rabbit in the Moona compelling and still timely read.

In this edition, we took past readers’ advice, so you will find a list of the characters and a glossary of some of the Chinese and Korean terms to avoid confusion.

To get a flavor of the writing, here  is podcast of prologue: https://youtu.be/ZAJZL0z4dS0